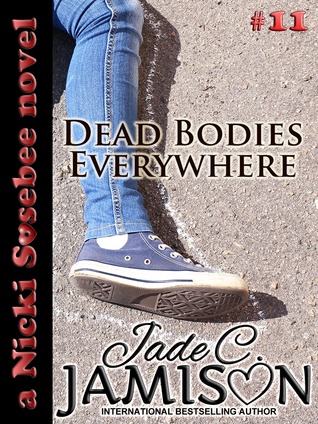 Nicki Sosebee is getting closer to something. She just doesn’t know what.

Nicki’s sleepy hometown of Winchester, Colorado, is the kind of place that deals with two or three deaths a year, not two or three a month, but a serial killer is brutally murdering young adults in the most gruesome ways. With the help of her friend, investigative blogger Janice Breaker, Nicki feels like they’re close to solving the mystery. Instead, she discovers that the corruption in her town reaches far and wide. As she gets closer to discovering the answer to all the dead bodies in her beloved town, she has to decide if she needs to stick to her guns or if it’s better to walk away and leave the headline for another day…

An officer in uniform approached the yellow tape that acted as a pathetic barricade to the middle of the alleyway, ready to turn Nicki away. Before she could reach in her purse to find her press credentials, Detective Nathan Wright appeared. “Aw, Sosebee. You do love me. You remembered the coffee.”

The uniform nodded slightly before stepping away, and Nathan raised the tape with his hand so Nicki could duck under it. “Don’t say I never did anything nice for you.”

Nathan was sneering, one eyebrow cocked. “I take it back. You don’t love me. You brought me convenience store coffee, not real stuff.”

“Yeah…real old. If I’d wanted convenience store coffee, I could’ve walked around the corner before you got here.”

“That place is still open?”

“I didn’t have many choices, considering I promised to be here in half an hour.”

“Guess I’ll cut you some slack then.” He ripped open the two sugar packets and sprinkled them in before replacing the lid and taking the coffee cup out of the tray, leaving it in Nicki’s hand. Rather than give him shit about it, she walked the few steps to the dumpster and lifted the lid to toss the trash in—and then she saw the body without any warning or preparation.

Nicki swallowed hard and turned quickly to look at Nathan. “Sosebee, you look like you’ve seen a ghost.” She wasn’t surprised—she could practically feel how the blood had drained from her face. Nathan started laughing then. “I guess you have seen a ghost.”

Nicki felt her eyelids lower. “That’s a bit gruesome, even for you, Detective.”

He shrugged. “Gotta find humor where we can.” He took several steps toward her but kept walking until he was right next to the lifeless body sprawled on the gravel next to the dumpster. “So I’m pretty convinced this is the same killer as our park killer. Wanna know why?”

Finally, our Nicki is back!!

I am a huge fan of Nicki.  She is feisty.  She is real.  She is a girl who had had her eyes opened to the crime all around her thanks to her job as a reporter and her on again but currently off again boyfriend Sean……MMM Sean ladies!!

K so this is a series and can’t be read as a standalone in my opinion. You could but TBH you won’t get half of the story or the angst of Jesse-Nicki-Sean so just start at book one please and thanks!

So, this book Nicki gets a lucky or not so lucky break reporting on a dead body and then bodies in her town.  She and Detective Wright spend a little too much too much together and we also start to wonder what his motives are with Nicki and the city???  Maybe Sean and his pessimistic ways are beginning to rub off on me??

Along with the investigation, Nicki and Sean are dealing with their relationship.  My hearts happy with what happened at the end and fingers are crossed for MORE in the next book.  Jesse and Nicki also seem to get some relationship closure which was much needed after how things ended with them.  Nicki and Jesse are forced to spend a lot of time together since she moved in with him…wait wait wait..platonic and yes Nicki can do platonic with him because we all know where her heart lies!

The story of the murders is left open but we know where the investigation is headed plus we have some new players to consider if we can only put a face with the name!!

Jade C. Jamison was born and raised in Colorado and has decided she likes it enough to stay forever. Jade’s day job is teaching Creative Writing, but teaching doesn’t stop her from doing a little writing herself.

Unfortunately, there’s no one genre that quite fits her writing. Her work has been labeled romance, erotica, suspense, and women’s fiction, and the latter is probably the safest and closest description. But you’ll see that her writing doesn’t quite fit any of those genres.

You’ll have to discover Jade’s writing for yourself to decide if you like it.