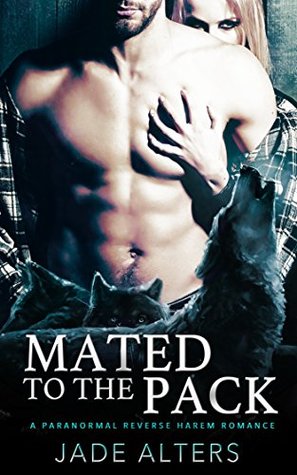 Mercenaries…all four of them Half-Wolf and Half-Man…and all of them willing to risk anything to keep her for the pack.

Vivian was thankful for everything her wealthy Aunt left her.

Until she found out that also meant she’s now responsible for that old run down mansion she grew up playing in.

She would keep it, but she would go bankrupt; she would sell it, but there’s no one out there to buy it.

That’s when four super-hot and mysterious renters show up to save the day.

They’ve got more big secrets than she can handle though, the biggest of which might be why she’s finding herself drawn to each of them.

Whatever it is, this pack has found its mate, and the only question is going to be whether Viv can handle being mated to this pack.

Mated to the Pack: A Paranormal Reverse Harem Romance is a standalone story with no cheating or cliffhangers. It contains language and scenes that are intended for mature readers.

I received this book from a giveaway.

I love RH and Paranormal so this was a great book to grab for free.

This book is about Vivian who was rescued by 4 men and told to look after her because the cartel is after her for something her friend stole.

The men come to the house her grandmother left her and are all confused to too why they are drawn to her.  Each of the men feel an instant connection and then flip when they discover they ALL have the same desire to be Mated to Vivian.

Vivian who is NOT a shifter is kinda floored and how she is attracted to all these men and then to discover they are WHAT they are…..she is a bit confused about everything.

The story is steamy in parts, but the beginning is really choppy and confusing.  For a quick read one afternoon it was fun.

Tarot readings, horoscopes, and anything paranormal pretty much sums it up! Oh yes, did I forget, hot guys? I probably have the most irregular sleep patterns out of everyone I know, but that’s because most of my time is spent on trying to hit at least one spot in everyone that reads my stories.