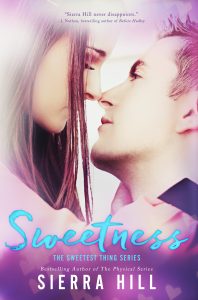 I’m the girl from the school of hard knocks.

Nothing has ever come easy for me. So forgive me if I’m a bit reluctant about Kincaid Griffin – born-with-a-silver-spoon in his mouth, conceited college hoops player. A guy who could get any girl he wants, and yet, is suddenly everywhere I am trying to woo me. The more I protest, the more persistent he becomes.

Let’s face it. As a college athlete, I don’t chase girls – they come to me. I’m as arrogant and cocky as they come, getting nearly everything I want, whenever I want. But there is nothing sweeter than a girl who plays hard to get. And Ainsley Locker is so full of confidence that she knocks me off my feet from the moment I meet her. She’s a challenge. And I like challenges. So I go full-court press to win her over.

But when a stupid mistake turns viral, slam dunking all over my life in a media frenzy, my spot on the team may be in jeopardy, along with my shot at winning the girl.

I received a copy of this book from the author for an honest review.

I don’t read many sports related boos but this has a good story line with strong characters.   Not only was I invested in the two main characters but also the other characters also that I need to know more about.

Cade was the all-star that had everything handed to him, never had to chase the girls they were always there waiting for him. However, one bad decision one night threatened to end everything for him.

Ainsley has never had an easy life between working two jobs, raising a teenage sister and going to school she does not have time for anything else especially guys. When she first meets Cade she gives him the brush off when he tries to turn on his usual charm. At this time I was cheering Ainsley on for this move thinking don’t need this guy.

As fate would have it that would not be the only time these two run into each other. Ainsley still wants nothing to do with Cade and well this only makes him want her more. So he pursued harder and she finally caved. But just as things are going good for them his secret comes out in a big way. Now the question is can Ainsley forgive him and can their relationship overcome this?

I enjoyed Ainsley and Cade’s story and also getting to know the other characters. I am excited to see where the other stories are going to go. Cannot wait for the next Story.

Sierra Hill wrote her first full-length romance after a corporate acquisition led her to a stint of unemployment, offering her some quality writing time.

She loves writing about the fictional characters that live in her brain who constantly shout for their own love story to be told.

Sierra resides in the Pacific Northwest with her husband of twenty years and her long-haired, German Shepherd. She is currently working on her next book.

Thanks for reading and reviewing her books. Keep the passion alive!