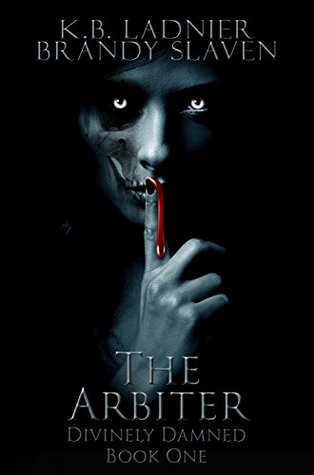 “She is too sinful to be Divine
and too righteous to be Damned.”

Nocturna; a hybrid, an all around smart ass, and the owner of The Apothecary, a night club for all the denizens that walk the earth to play amongst humans, is about to have her life altered by the Creator of all.

The last Arbiter has fallen and a new one must be chosen, one of both Divine and Damned blood. She will be both judge and executioner for the supernatural races, choosing how to punish or bless the souls brought before her.

Within her first week with her new status, Damned from all over are disappearing and disturbing videos of Damned being tortured and killed are surfacing. When Lord Monroe, one of The Infernal leaders of the Damned, becomes one of those who are missing, the Damned begin to point their fingers at The Rites; the Divine soldiers who are part of The Order of Abel. The clock is ticking, and it is her responsibility to find who is responsible and pass judgement. With the help of Enoch, an Infernal of the Damned, and Larkan, a Rite of the Order, Nocturna travels to Lord Monroe’s estate, hoping to find clues as to what happened to him and all the others.

Her integrity and her heart will be pushed and pulled in all directions as she faces the biggest dilemma of her existence; can she make the decision that is right for the lives of all, not the decision that is easiest for her. Will she stay true and lead the world into peace? Or will she choose sides like all the Arbiters before her and lead them all to destruction?

**This is a Reverse Harem Dark Romance that is recommended for ages 18+. There are elements of violence, such as torture and a body count, and steamy scenes that are sure to light you on fire. If you’re into that sort of thing, then boy do we have the book for you!

Brandy Slaven lives in Tennessee with her husband and two wild children. If you can’t find her typing away at her laptop, you will find her with her nose in a book at the beach or hiking at one of the state parks. Bringing her characters to life is one of her greatest accomplishments.

K.B. Ladnier is from a small city in Southern Mississippi. She has one daughter and three cats who she claims are stealing her soul in only tiny doses so she won’t notice. She is a cyborg and spends most of her time hiding from her tiny human so she doesn’t have to share her snacks as she reads her favorite books. She hates the beach yet lives only ten minutes away from it and daydreams of mountains and snow. She is married to a hot nerd and loves him dearly even though he hordes cookies and occasionally hides her prosthetic leg from her when she’s mad, so he can get a quick escape. She plans to write as long as people continue loving what she does, otherwise she’s going to say screw it and do her second dream of owning a coffee shop. Though, she may still do both.