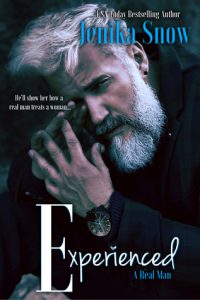 He’ll show her how a real man treats a woman…

I’d never known how good it could feel to be taken care of by a man who knew what he was doing.

Until I was with Hugo…

I was older than she was.

She was innocent, hadn’t experienced all that life had to offer.

I could give her that experience.

Sabine consumed my thoughts, made me desire nothing else but her. No other woman compared to her, and because of that, I hadn’t been with a woman for four years, which was also the last time I saw Sabine.

But I was done feeling guilty for what I desired. I wanted Sabine in my life, by my side, and I was about to make that a reality.

I didn’t know if she’d ever been treated the way a female should … but I was going to show her how a real man takes care of a woman.

Warning: If you’re into super short, hot, dirty reads containing a much older hero and younger heroine … keep on reading. This story is guaranteed to make you feel all warm and fuzzy inside, give you that sweet HEA we all deserve, and make you want to search out an experienced older man for yourself.

Who doesn’t love a story about an older man and a younger woman? Well this girl sure does. Hugo is much older than Sabine but man is he yummy. Russian, wealthy and a silver fox. He’s been in love with Sabine for awhile. Little did he know that Sabine felt the same way. Finally, they come together and let their feelings for each other take control.

This book is book 4 in the Real Man series but each book can be read as a standalone. It’s short. Instant. And super hot!