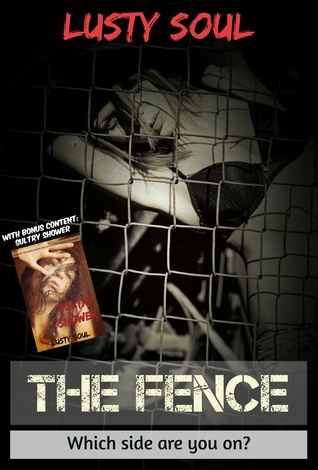 A young man drops his date off at her home and hopes for something more than a kiss. But what he gets is more than he hoped for, and more than he can handle…
The Fence is all that stands between us and our animal nature. It serves as a boundary, keeps us safe and civilized, until darkness falls and the enclosure fails…unleashing something into the night that is not quite human..

I received the book for my honest review.

We jump right into the coaxing of Tom to Jen to give him some relief from the blue balls he suffers from.  He’s trying to be patient and wait out the couple months left until Jen leaves her parent’s home.  Unbeknownst to Tom, Jen is yearning for satisfaction as much as Tom is.  I found myself thinking come on just do it already! HA!  Then I have to remember that the story involves young people (oops).  It’s a story line that as an adult, it can be very easily related to.

The Fence scene…..HOT, HOT, HOT!!… Whew.  Well written, in my opinion.  So glad that Tom got relief from his suffering.  Dang….to be on the receiving side – that’s where I want to be.   Being a novelette, I could and want to read how and what Tom does with his new found education and if he tries to keep the action continuing.  Also, when does Jen get some action herself?

Lusty Soul, or Lucy, is a simple Flemish girl with eclectic interests. She started writing erotica to vent her mind, and to improve her command of the English language. In her free time she’s an avid reader of horror and speculative fiction of such grand masters as Stephen King and Dan Simmons. Her musical tastes range from A to Z and everything in between. She’s very active on social media and fights a continuous battle to conquer her legendary procrastination. If she ever publishes another story, that dragon will have been slain…temporarily…