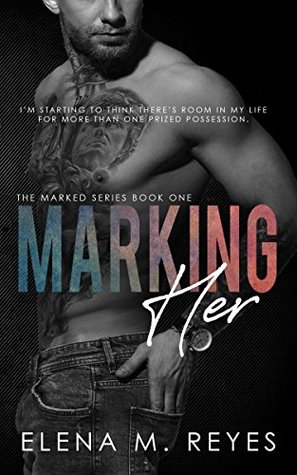 Talan wants to mark Maya—with more than his ink. The owner of a prominent tattoo shop, he’s used to being hit on by easy women. Though “easy” is not a word associated with Maya when she comes in to support her friend. Flirtation ensues, but what will it take to break the painted man.

Sooooo HAWT!!!!! This is a whirlwind of hot, sass, and tatts!!! We start by meeting our painted man, Talan. He is the owner of a tattoo shop and is constantly being hit on by easy women that he could take home at any time he wants. He is smitten by Maya, a girl who comes into the shop for support for a friend that is getting tatted. Maya is a small girl but takes no crap from anyone. She is witty and he is immediately pulled in by her and she by him. It’s sort of an insta-love type situation but with so much more! The wit and banter between all the characters is hilarious and keeps the story going. So full of angst and of course we have a crazy ex!!!  While the two of them are trying to figure out exactly what they are doing “together” they are both trying to reign in their feelings. She wants to go for it and he wants to go slow. But eventually the zero to sixty happens! One of my favorite lines…. “I have no words for the madness you create inside of me.” This was a fast and intense read that made me dive right into Marking Him, the second book in the series, right away! Loving me some Talan and Bitty!!!

Elena M. Reyes was born and raised in Miami Florida. She is the epitome of a Floridian and if she could live in her beloved flip-flops, she would.
As a small child, she was always intrigued by all forms of art–whether it was dancing to island rhythms, or painting with any medium she could get her hands on. Her first taste of writing came to her during her fifth-grade year when her class was prompted to participate in the D. A. R. E. Program and write an essay on what they’d learned.
Her passion for reading over the years has amassed her with hours of pleasure. It wasn’t until she stumbled upon fanfiction that her thirst to write overtook her world. She now resides in Central Florida with her husband and son, spending all her down time letting her creativity flow and characters grow.