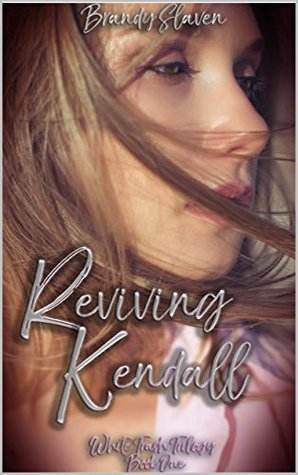 “I’m not so sure that I’m strong enough to take yet another blow to the heart.”

Growing up, I’ve always lived on the wrong side of the tracks. I’m used to the stares, name calling, and disrespect. A tragic accident that leaves me short three of the only people I’ve ever loved, has me devastated enough to try to end my own life. Just when I think there’s no hope, I find a reason to live again, or four of them as a matter of fact. Lucas, Maverick, Teagan, and Goose. But what happens when those bonds are tested? I’m not so sure that I’m strong enough to take yet another blow to the heart. My name is Kendall Davis and what if my story doesn’t have a happy ending?

*This is the first book in a Contemporary Reverse Harem Trilogy.

*Recommended 17+ due to mature language and situations.

The rain steadily falls around us as we stand under the little canopy area. His hand is still at my elbow and I want nothing more than to lean into him. My eyes fall to my bus as it pulls away from the curb. Tears pool in my eyes and streak down my face at the thought of my now miserable walk home.

Lucas uses his other hand to pull my chin up to face him. His eyes roam over my face like he’s trying to figure out how to fix the white trash ruin that I am, but he has no idea just how impossible that would be. People are staring, and I couldn’t give two shits as Lucas locks eyes with me. His flicks down to my lips and back up again.

When your BFF tells you that you need to read this book and then follows it up by gifting it to you. You read it and Holy crap on a cracker this was an awesome book. I’m telling you I jumped into this book and could not put it down. Seriously before I knew it I was almost done with the book and it was 1:30 in the morning.

What does a girl who goes from having a nice life with grandparents who love her and 3 yes 3 boyfriends to having her world turn upside down and inside out. Kendall lost her grandmother to cancer then she lost Brian, Will and Casey in a tragic car accident. Now she does what she has to do just to get through each day. She gets tormented in school, has to work to help pay the bills, and takes care of her gramps who has cancer. She has too much on her plate to worry about boys.

Kendall finds herself waiting on Teagan, Logan, Goose AKA Grant, and Maverick at the restaurant. They come on strong and she blows them off. Kendall works hard for what she has and refuses to take handouts. It takes some time for Kendall to let the walls down around her heart but when she does she finds something in each of the guys. When the guys realize what she means to them and figures out how to deal with the jealousy things really get heated.

There were so many favorites for me in this book. The dates these guys take her on had me swooning. Even though each date was different and rightfully so since each guy has different likes. I loved seeing them happy on the mountain trip but when things go wrong I was heartbroken. And I was balling when Kendall’s world once again got turned upside down and inside out. I have to say a side character, Lincoln Logan’s brother now holds a place in my heart but Mav walked away with it. I’m telling you I need to read the second book and I will probably have a hard time waiting for book three. Thank you Angie for gifting me this book.

A few of my favorites:

His eyes roam over my face like he’s trying to figure out how to fix the white trash ruin that I am, but he has no idea just how impossible that would be.

“Kendall, this is probably one of the hardest things that you will ever have to go through, but it will make you a better person for it. You just have to live. If for no other reason than for them. Live life to the fullest, just like you know that they would want you to.”

“Kendall, don’t make us late to class because I will come over there, drag you out and drive you to school in whatever you’re wearing.”

Brandy Slaven lives in Tennessee with her husband and two wild children. If you can’t find her typing away at her laptop, you will find her with her nose in a book at the beach or hiking at one of the state parks. Bringing her characters to life is one of her greatest accomplishments.