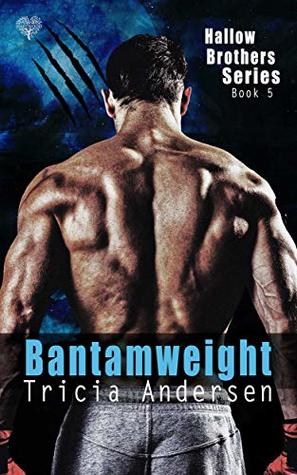 Abraham Hallow would do just about anything to get out from under his oldest brother, Josiah’s, thumb. That includes performing as the Luchador in the local semi-professional wrestling circuit. He gets more than he bargained for when he hooks up with a woman with multicolored hair. The draw to her is undeniable. He wakes up the following morning with the ancient mark of his ancestors, mating him to the mystery woman he met the night before.
It was a simple mission—find the infamous Hallow brothers, kill them, and bring back the amulet. Kai’s plans get derailed after one night of hot, crazy sex with a mask wrestler. When she finds out the wrestler was none other than Abraham Hallow, the youngest of the Hallow brothers, she is exiled from the mermaid kingdom. Yet the orders from her king still stand. Can she deny her ever-growing love for Abraham, or will she fulfill her duties of killing him?

Man, IF Josiah hadn’t claimed my heart I think Abe could have been my favorite.

This book has a lot of new information coming our way as to some other supernatural beings in the world like…MERPEOPLE!!  Yup mermaids are real peps!!  Annnd it seems Abe has himself a hot little mermaid named Kai.

Abe is really annoyed at all the “baby brother” cracks.  He wants them to realize he is a 21-year-old adult.  He knows there is a lot happening, but it makes him nuts the brothers feel the need to keep things from him.  This is part of why he is revolting and fighting under cover.

Kai is tired of being “owned”.  She can’t imagine what it’s like to be free.  Between her two “bosses” she can’t do anything for herself.  But she lives in a constant threat of loss of life from these people.  When she is drawn to a human boxer one night she is floored by this, but she goes with it.  This is a decision she is making all for her.  Little does she know what that one little act of freedom will encompass……the mating mark.

Kai is pulled in so many ways and is so confused because she takes the mating mark as one of property and being owned.  Abe has a lot to teach his little mate, but his true and unselfish love is one that shows her what real family is all about.  Seeing Abe stand up to his family for his mate melted me and Kai.

There are more things the Hallow family learn and more spells to be broken.  It seems everyone is coming for the family.  However, their love and bonds will help to keep them safe until they finally end this war.

Back off! Abraham is mine!!! LOL! Abe is the baby of the Hallows and the brothers are more overprotective of him since there are so many more magical beings coming to the surface. Abe is dying to get out and be his own person/wolf. The brothers have no idea but he has been hiding as the Luchador. A completely masked wrestler that no one knows the identity to but Abe. After a fight he is drawn to Kai, the beauty with the multi colored hair. Kai is drawn to him as well and then one thing leads to another and things happen (*wags eyebrows*). She finds out that he is a Hallow and her orders still stand to kill them all. The only problem….well, they are mated. These two are so stubborn and so hard headed that the push and pull between them gets hotter every time they collide. Now we have a feud between the Mer-People and the Hallows. Everyone is still after the Heka and momma’s amulet. What is one more problem? Oh yeah, Loch. Abe is slotted to fight Loch with whom Kai had already been promised to. No matter how many different magical elements and beings we get with this series they are all placed in the perfect place and flows extremely smooth. All the brothers and their mates still play integral parts in Abe’s story. This particular story really had my emotions running on high the entire time. I wasn’t sure if Kai was dying at one point, if Kai is going to go through and kill the Hallows, if the Heka and amulet are truly safe….Bantamweight has so many twists that I never really knew how the story was going to end. Rest assured, this is one of my favorites of the series! I was never able to guess the next move and it really kept me on my toes. The series is a must read!

Tricia Andersen lives in Cedar Rapids, Iowa with her husband, Brian and her three children – her sons, Jake and Jon, and her daughter, Alex. She graduated from the University of Iowa with a Bachelor of Arts in English and from Kirkwood Community College with an Associate of Arts degree in Communications Media/Public Relations. Along with writing, Tricia enjoys coaching and competing in track and field and traveling to cheer on her children in their various activities.