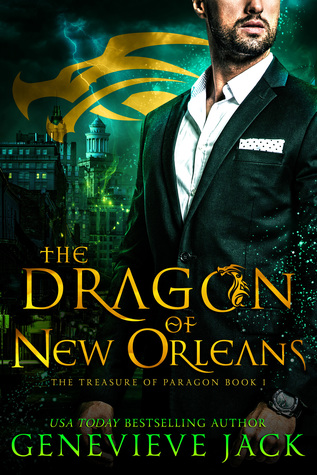 For 300 years, Gabriel Blakemore has survived hidden among humans after a coup in his native realm of Paragon scattered him and his siblings across the globe. Keeping his secret has preserved his dragon magic but led to a life devoid of true intimacy. Now a voodoo curse threatens to end his immortal existence. His only hope is to find an antidote, one that may rest in a mortal woman.

Death is a welcome end for Raven Tanglewood. After five years of unsuccessful treatment for her brain cancer, her illness has become a prison, something her adventurous spirit cannot abide.

When Gabriel heals Raven and binds her to him, he awakens a connection stronger than any he’s ever known. But she sees the bond as another kind of captivity. Can Gabriel win her love and trust in time to awaken the life-saving magic within her? Or will his fiery personality and possessive ways drive her from his side and seal his fate?

When I saw this book, I was curious for a couple of reasons.  The first is I wanted to read a book from this author and jumping into series that are already out plus a few deep is hard to do.  The other reason is HELLO SHIFTERS…..HELLO DRAGON SHIFTERS.  To be honest, I have only read one other series about dragons.  I loved the direction/spin she took with her series because it was very different from what I expected.

I will say the world building was slow and a time or two I was a little confused BUT stick with the story because after a while I couldn’t put the book down.  I was dying to know about Raven and her dragon Gabriel.  My favorite scene is when Gabriel admits how crazy he is for Raven…..this woman brought a powerful dragon to his knees…..sigh……..

The angst between the characters builds and it BURNS people…sooo burns!!!  I was so ready, much like Raven, for when they did some “How you doing “ time *Wink wink*  Their love story was very sweet and I enjoyed watching them fall for each other while also trying to protect the other.

The curse and the family fall out Gabriel has to over come was crazy intense.  Poor guy has a crazy woman and crazy uncle after him!!  I mean he can’t live anywhere without having threats to his life!

I am so looking forward to the next book and hanging with Gabriel and Raven again.  I am sure Gabriel will be just as possessive over Raven with his brother which is hilarious BUT also trying to find their siblings will be good reads.   I wonder how the family will react to the everything Gabriel has to warn them about in regards to their family!!

USA Today bestselling author Genevieve Jack writes weird, witty, and wicked-hot paranormal romance and fantasy. Coffee and wine are her biofuel, the love lives of witches, shifters, and vampires her favorite topic of conversation. She harbors a passion for old cemeteries and ghost tours, thanks to her years attending a high school rumored to be adores the beaches of the southeast, where she spends her days with her laptop and one lazy dog.