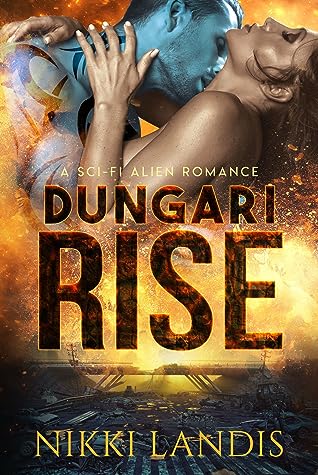 Synika was his mate and he didn’t give a damn if she refused.

“You’re going to be my bride. I’ll make certain of it.”

Synika has hidden from the dominant alien race that conquered Earth 100 years ago in search of fertile females. She’s a strong-willed and headstrong woman who knows what she wants and it isn’t belonging to some Dungari male and auctioned off at the annual Choosing. When she meets Tuvari and their worlds collide, Synika is forced to confront her prejudices and decide if the Dungari male is her friend, foe . . . or maybe more.

Tuvari helped establish the first colony on Earth and works with the Dungari Bureau of Human Affairs. He’s a soldier and a warrior with a reputation, determined to keep his race from extinction. Strong, charismatic, confident, and sexy as sin he’s used to getting his way and exactly what he wants. Until he meets Synika. Tuvari has always believed his one true mate existed but could he dare to fall for a human?

Is it love, lust, or something more that draws the two together? In a world torn apart and ravaged by lies, can Tuvari and Synika move past the betrayal of a nation and find common ground?

Dungari Rise is first in a new exciting series of alien romances with heat, Alien Alphas of Pilathna.

Tuvari and his people came to Earth looking for females.  They weren’t the nicest or sweetest of dudes that is for dang sure.  They were a bit arrogant since they are the top of the apex now.

Synika has been hiding from this culling or Choosing Ceremony.  Her brother has done a lot to shelter her from the world that they live.  However, she is taken to be part of a harem for a prince who is not the kindest of people.  But Tuvari sees Synika and he knows he needs to tread lightly. Her sass and fiery nature put his heart all kinds of wild.    He is a brother to the Prince and starts to do everything he can to protect an save her.

The book is very open to the brutality that Synika sees and it can be a bit difficult to read but the main character is strong.  She is able to over come and forge a strong relationship with Tuvari.

This book was hard to read at times but I really enjoyed the sci-fi nature of the book along with the dystopia feel.

Nikki Landis is the award-winning & Amazon bestselling reverse harem, paranormal, and sci-fi author of over 30 romance and erotica novels. Her recent release Refugee Road is the Gold Medal winner of the 2017 IPPY award for Best Romance/Erotica. Her stories have all heat levels so you’re sure to find something you love. Nikki grew up sneaking her mother’s ‘bodice rippers’ and falling in love with the stories. Now she enjoys writing her own as well as reading and reviewing on her blog with a couple of like minded friends, the Picky Bitches Book Blog.