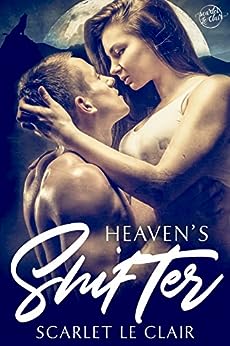 When Nevaeh is kidnapped and her blood drained for her powers, she believes her life to be over.
A handsome stranger materialises and saves her from her fate only to disappear into the woods before emergency services come to save her.
Now she will have to rebuild her life over again, finding a place to live, a place she can call home.
Will she ever see her gorgeous hero again or is he just destined to plague her dreams?

Dane’s life was over when his soulmate was killed in a tragic accident when they were kids. Now he just moves through life, protecting his pack and the town they live in.
That is until he pulls a woman from what appears to be an abandoned cabin in the woods.
Her face sets his soul aflame, calls to him.
How can she be his long lost Anya when he buried her himself?
Will this mysterious female hold enough light to bring him from his darkness?

I have given this book for my honest review.

This is my first Scarlet Le Clair book as well as my first for any with the angelic/heaven/shifter angle.  Nevaeh was a captured shifter angel who was being drained of her heavenly powers.  The captors were evil and had captured and killed several other angel shifters.

Our hero, Dane, and his pack attacked the captors who fled leaving behind a burning house with Nevaeh inside.  Weak, she tried to escape and was found by Dane.  Dane had lost his soul mate years ago in a car accident with her parents.  He felt an immediate connection with Nevaeh and knew there was just something familiar and special with her.

This won’t be the last Scarlet Le Clair book I read.

Scarlet Le Clair is from the South Wales Valleys UK, where she lives with her husband, two children and their fur baby.
Scarlet loves to read and always has her book or kindle with her wherever she goes .
she loves to write Erotica but her main love is zombie, horror.