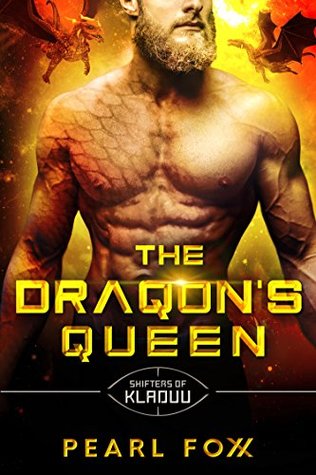 She just wants time to heal her broken heart. Instead, she finds her true calling astride a sexy, grizzled Draqon with fire colored wings.

Niva returned to Kladuu for the Alpha of Clan Vilka, but when he took another mate, her heart shattered. To pick up the pieces, she travels to the Draqons’ hive with their menacing, gruff leader. But behind his black eyes lies the one man who may be able to put her pieces back together.

Years ago, Zayd lost his Queen in a battle that left him scarred and full of self-loathing. But when a beautiful young human comes to live at his hive high in the snow-capped mountains on Kladuu, his heart begins to thaw. Flying in his Draqon form has always been about harnessing his rage, but with Niva on his back, he finds a freedom he never felt, even with his Queen.

When Kladuu is threatened, Zayd must face his fear for Niva’s safety and accept her as his rider and new Queen, or it may be the end of the planet they both call home.

* The Draqon’s Queen is book four in the Shifters of Kladuu and should be read after The Vilka’s Captive for a consistent series experience. *

Note to Readers: This science fiction alien romance series contains lots of action, alpha males, fierce human women, and steamy romance. If you love fast-paced sexy books set in space with alien shapeshifters then this series is for you! Guaranteed happily-ever-afters with no cliffhangers.

A fiery story! Niva’s story is one of my favorites! Meek Niva is able to talk Zayd into taking her back to the Draqon hive with him. Zayd is compelled to bring her with him, and has no idea why, but it is killing him inside trying to figure it out. Niva wants to put her life on Earth and life with the Vilka’s behind her once and for all. She just wants to find her place and be accepted. She is drawn to Zayd and him to her but they try to fight it. Zayd has experienced a major heartbreak and coming to terms with this is putting Niva in harm’s way. In the past books the Vilka’s and Draqon’s have always had issues with each other. With impending doom on the horizon that’s putting them all at risk they are forging an alliance. The question is finding out if it will be worth it and if they can all be saved. The push and pull between Niva and Zayd is fire and ice. Hot and cold all at the same time.  The story and the blooming love will bring you through a range of emotions from being happy and laughing, on the verge of tears then making your hear t pound with the suspenseful twists. The world of Kladuu is simply intriguing! I would visit if I could. Until then, I will continue the series as it keeps getting better and better!

Pearl Foxx is the author of epic space adventures with steamy romance you will never want to stop reading. Join in the fun at www.pearlfoxx.com.