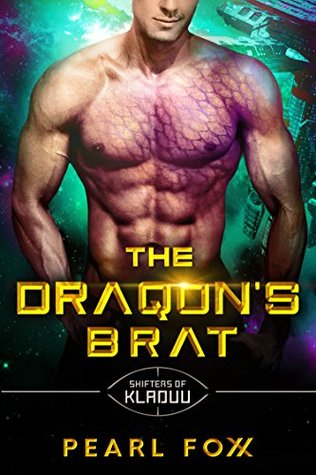 She’s the spoiled daughter of the evilest man in the universe, but this Draqon refuses to let his feelings get in the way of his mission: assassinating her father.

Veronica Gideon has grown up a proper debutante. Intergalactic parties, socialite friends, and all the trappings of wealth and power. Attitude and privilege are her way of life until she’s forced to confront the underbelly of her father’s leadership by her charismatic, sexy guard with his own secrets–secrets that could get her killed.

Maxsym defied his Draqon hive leader to infiltrate the Zynthar International Space Station and kill Commander Gideon. But one thing threatens to derail his rogue mission, and she’s as beautiful as she is infuriating. Far from the safety of Kladuu and his hive, Maxsym must navigate a space station full of dangerous humans and his unexpected feelings for the bratty human woman with more depth than he’d expected.

Will the two of them save Kladuu, or will their differences rip them apart?

Note to Readers: This scifi alien romance series contains lots of action, alpha males, fierce human women, and steamy romance. If you love fast-paced sexy books set in space with alien shapeshifters then this series is for you! Guaranteed happily-ever-afters with no cliffhangers.

I cannot get enough of The Shifter’s of Kladuu series! This is the 5th book and although these can be read as standalones I highly recommend reading them in order as many of the characters come back throughout the series and there is a better understanding of exactly what the back story is on each one. The Draqon’s Brat is the story of Maxsym, the Draqon’s Hive Master, and Veronica Gideon, the spoiled debutant daughter of Captain Gideon of the Zynthar Space Station. Maxsym is a playboy from the hive and has defied orders and has infiltrated the Zynthar Space Station in hopes of assassinating Captain Gideon due to his dealings with the flesh trade (trafficking). Maxsym has been appointed the guard over Veronica and is hoping this will get him closer to her father, Gideon. Right from jump Maxsym and Veronica absolutely hate each other. Well, they really love to hate each other, LOL! There is an intense push and pull between the two. They are both hard headed and stubborn and the banter between each other is both fun to read as well as frustrating. At times you want to shake them both and tell them to get on with it! But this frustration is incredibly well written and necessary for the story. Veronica and Maxsym both uncover more secrets and cover ups that Captain Gideon is part of. They both need to decide if they are worth it for each other or if they need to part ways due to the different worlds they are from. The story is one of those that you will sit and read in one sitting and not even realize the amount of time that has gone by. Trust me, you need this series in your life!

Pearl Foxx is the author of epic space adventures with steamy romance you will never want to stop reading. Join in the fun at www.pearlfoxx.com.