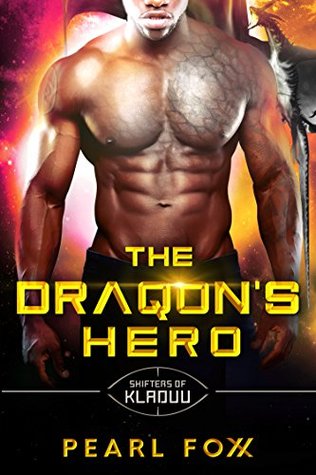 Embark upon the final journey in the Shifters of Kladuu series with one fierce Draqon female and the mysterious legend of a Draqon male rumored to be so powerful he could save the entire planet from war.

Kinyi has trained her entire life to be the strongest, most lethal rider on Kladuu. She’s ready to soar through the skies on the back of a shifted Draqon, which is a problem considering all the unmated males are intimidated by her and she refuses to be bound to a man who isn’t her equal. When she’s sent to a crumbling Earth to track down the White Horn and bring him home to fight, she thinks it’s a fool’s errand. Until she comes face to face with the legend himself.

Tane spends his life running from the myth of the White Horn. On Earth, he’s known as Tane, the manager of an underground cyborg fight club. But when a beautiful Draqon female from the other side of the universe hunts him down and demands he save Kladuu from a war with the humans, he must confront his true nature to save his people.

When war comes to Kladuu, it will take all of the clans uniting against the militant humans to save their planet. For Tane and Kinyi, is fate leading them to a perfect happily ever after or into the fires of their final battle and ultimate sacrifice?

Note to Readers: This science fiction alien romance series contains lots of action, alpha males, fierce human women, and steamy romance. If you love fast-paced sexy books set in space with alien shapeshifters then this series is for you! Guaranteed happily-ever-afters with no cliffhangers.

Oh holy hotness! Whew! Ask no questions, tell no lies. Kinyi is one fierce Draqon female who I loved to hate. When I first met her I wanted to throat punch her but as I got to know her in the Draqon’s Hero I found out that she is just misunderstood. She is sent to Earth to find the White Horn. As she is scouring the worst areas she locates him in Cyn City. The problem is that Tane, aka White Horn, has no want or desire to go back to Kladuu. He has his reasons but Kinyi is relentless. Tane runs an underground fight club and Kinyi ends up being in the middle trying to prove herself to Tane. All hell breaks loose and they find out that Gideon is missing. Kinyi just knows that he is on Kladuu and know she must find a way back home. Tane feels an undeniable pull to Kinyi and vows to help her get home but has no plans on going with. Until….. well I can’t give it away but he does go home. Both of these characters are incredibly strong and independent. Both have their secrets and fears. But when these unravel it will blow your mind! The story starts in gritty Cyn City and ends on Kladuu but there is never a dull moment with these two. No matter how much I didn’t like Kinyi at first, she made it up to me with Tane. This is my favorite of the series. It is bittersweet as I don’t want the series to end but it is set up beautifully for the next series in Cyn City! I am hoping we might see some of the Kladuu characters in Cyn City, but only time will tell. Bravo, Pearl! You rocked this!

Pearl Foxx is the author of Science Fiction Romances with hot Alpha Males and surprising twists you will never want to stop reading. Join in the fun at www.PearlFoxx.com.