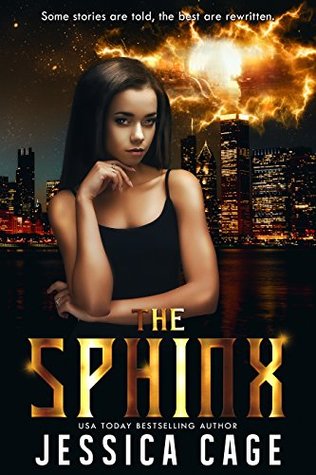 Some stories are told, others are not, the best ones are reimagined.

Stories are told of the sphinx—a monster with the head of a woman, the body of a lioness, the wings of an eagle, and a tail tipped with the head of a serpent. This beast was told to have been made to guard the entrance to the Greek city of Thebes. For each traveler to cross her path, a riddle was presented. If they could answer it correctly, access would be granted. What was her riddle?
“What is the creature that walks on four legs in the morning, two legs at noon, and three in the evening?” The price to pay for answering the riddle incorrectly, which of course they all did, was not a simple denial of entry to Thebes. Instead of turning them away, the sphinx, monster that was, strangled them with her tail and devoured them whole.
The story goes that when it finally came to pass that someone could answer her riddle and the consecutive ones to follow, she committed suicide. What else was a girl to do? Some say she threw herself down from the high rocks and fell to her death, while others say that she devoured herself, subjecting herself to the same punishment she dished out to all those who had failed before, a talented feat.
However, the question remains … what really happened to her?

This has it all! Greek Gods, Sirens, Vampires, Shifters….all things paranormal! LOVED this book! As you read in the description this is about the Sphinx and what really happened to her when she dies. As all stories are told over the years they change, just like the game of telephone that we all grew up with. Asa is our main character here. She was, or still is, the Sphinx. She was cursed to be the Sphinx when she denied the God of War, Ares. She was bound to be cursed forever but she found her loophole and went into hiding. She continues to hide and plot just waiting for the day that she faces Ares again. She is out for the ultimate revenge….but come to find out that she may not be the only one that is out for revenge (not telling you who!!!!) She has lived a lonely life preparing for the moment that she can seek her revenge but there are always speed bumps as she has been living in isolation for so long. I believe Asa meets her match with Carter! When the two of them meet the sparks fly! They are attracted to each other but they both have wicked trust issues. As the story unfolds and truths are revealed they are going to have to decide if revenge is worth it or if they can survive….together. This has the perfect mix of paranormal mixed into the retellings of Greek history. Action packed with a love story! Jessica Cage is a new author to me and I look forward to reading more of her stories. This is definitely an intriguing page turner. You won’t want to miss The Sphinx!

Born and raised in Chicago, IL, writing has always been a passion for Jessica Cage. She dabbles in artistic creations of all sorts but at the end of the day, it’s the pen that her hand itches to hold. Jessica had never considered following her dream to be a writer because she was told far too often “There is no money in writing.” So she chose the path most often traveled. During pregnancy she asked herself an important question. How would she be able to inspire her unborn son to follow his dreams and reach for the stars, if she never had the guts to do it herself? Jessica decided to take a risk and unleash the plethora of characters and their crazy adventurous worlds that had previously existed only in her mind, into the realm of readers. She did this with hopes to inspire not only her son but herself. Inviting the world to tag along on her journey to become the writer she has always wanted to be. She hopes to continue writing and bringing her signature Caged Fantasies to readers everywhere.