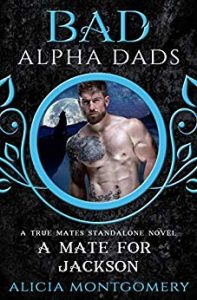 Bad Alpha Dad Jackson Forrest’s got a lot on his plate.

A business to run.

A clan of unruly werewolves.

And of course, a trouble-maker of a son whose mission is to cause as much chaos in his life as possible.

What happens when his well-meaning family tries to set him up?

Liz Cimms seems to be the perfect woman – beautiful, smart, and would make a great mate and mother to his wild son.

Then why can’t he get nerdy Jordan Matsumoto out of his mind?

**Part of the True Mates Series, but can be read as a standalone**

I voluntarily reviewed an Advance Reader’s Copy of this book.

What’s hotter than a alpha wolf?  A alpha wolf that’s a dad of course!!!

Jackson is alpha to the Shenandoah Clan.  He is also a single father raising a pre-pubescent shifter with only the help he gets from his mom since the child’s mother left when he was a baby.

Jordan is a wolf that really does not work well with others, not that she’s mean or anything just that she likes to do things her way without the input of others.  She is also analytical which is good as a scientist in the labs at the Fenrir Corporation bad that it also goes hand in hand with her not working well with others.

Jackson runs a corporate retreat that the Fenrir Corporation uses and  Jordan is forced to go one it or she loses her job.

It’s so funny when you have your mind set on what you think will be a good fit in a partner but fate has other plans.

Jackson thinks he wants a woman that will be good living in the country, was raised in the kinda life he was, and has business sense.

Jordan hates the outdoors, which is crazy as a shifter, but she likes Austin Jackson’s son.  Actually they like each other, find that they have similar likes.

What should not go together fits like a glove and Jackson and Jordan fit perfectly even if they fight it.

Montgomery brings us a hot dad, a scary rouge shifter, a misunderstood kid, and love.

You can totally read this story without having read any of the True Mates series, but it is a series that I can say you won’t wanna miss.

Alicia Montgomery has always dreamed of becoming a romance novel writer. She started writing down her stories in now long-forgotten diaries and notebooks, never thinking that her dream would come true. After taking the well-worn path to a stable career, she is now plunging into the world of self-publishing.

Sexy shifters, billionaires, alpha males, and of course, strong, sexy female characters are her favorite to write. Alicia is a wanderer, along with her husband, they travel the world and have lived in various spots all over the world.