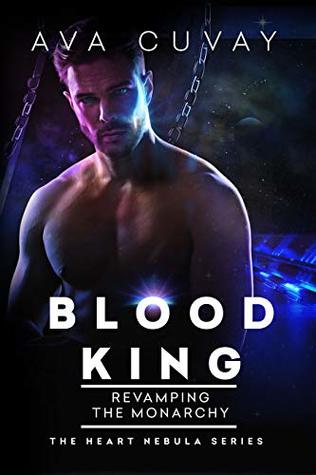 Dracula was an upstart nobody from an alien race of bloodsuckers… Kaz just met the planet’s King.

Kazandra Lyon’s failed life sucks. But her vacation to a popular destination-planet sucks on a whole new level when she’s abducted and whisked off to a dark castle mired in twilight. She struggles against the attacks of a bloodthirsty monster and her growing attraction to the sexy and mysterious vampire king. Amidst murdered palace staff, political power struggles, and the king’s blood-searing seduction, has Kaz bitten off too much? Will she return to the unhappy safety of her failed life or stick her neck out and embrace a future with the lusty king who thirsts for her?
Away from his homeworld for far too long, King Rune Lahdunae’s political influence has weakened and his vision for his people is now a relic from a bygone era. He struggles to regain his royal standing as monarch, resurrect his race’s proud heritage, and keep his randy fangs off his beautiful guest. Yet Kazandra’s spirit and humor arouses a hunger in him more primal than the need for her life-giving blood. Can he entice her to remain as his honored guest… and possibly his wife? And can he thwart the relentless killer who is drinking his people dry before Kazandra becomes the next victim?

“Blood King: Revamping the Monarchy” is Book 3 in The Heart Nebula Series. Like it’s interstellar namesake, The Heart Nebula Series is a loosely-connected cluster of stand-alone Romantic Sci-fi stories with sassy heroines, gutsy heroes, passion and adventures set in a galaxy far, far away. In essence, it’s the stuff of stars.

We have all been at a point in our life where we just need to get away from it all. Kaz decides to go to a popular destination-planet to relax and unwind. This place just sucks! Literally and figuratively. She is at a spring break type of place and she is kidnapped and taken to the other side of the planet that no one goes to just for fun. She is placed in the dungeon and is fed on by a monster. She is finally freed by King Rune and his way of apologizing is to have her spend her vacation at his palace. Rune has been brought back to life after 1000 years of being gone to find that his home has been run into the ground. He has yet to figure out exactly why he has been brought back and is struggling a lot with getting the monarchy back under control, dealing with murders in the palace, falling for Kaz and the fact that he is hiding exactly who he is to her. With all of this going on, Kaz is being herself, everyone loves her, and she is falling in love with Rune. The two of them have a lot of inner conflict within themselves and are so different from the other. But opposites attract and the two of the complement each other so well. The only thing is that they both have to be honest with each other and once the honesty is let out will they be able to be together? There is a ton of craziness happening at the palace when Rune hosts a ball of sorts. There is a death and kidnapping. Kaz finds herself in the middle of another mess and when the bad guy is figured out…..well lets just say oh holy hell because I so didn’t see this coming. I knew there was something fishy going on but when the twist unravels, it’s epic!!!! Blood King pulls you into the story and is the type of story that will constantly have you trying to guess what the hell is going on. And when the bread crumbs finally fell into place I was speechless! The sexy king will have you rooting for him and seeing how Kaz’s wittiness and no nonsense attitude brings him out of his shell will make you fall in love with this story. Well done, Ava Cuvay! Bravo!!!! 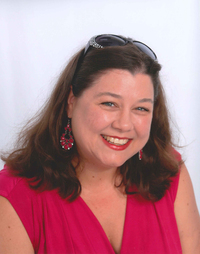 Ava Cuvay writes out of this world romance featuring sassy heroines, often-alien-but-always-sexy heroes, and an alcoholic beverage or two… Set in a galaxy far, far away. She resides in central Indiana with her own scruffy-looking nerfherder, kiddos who are growing up without her permission, and two kitties that make her laugh. She believes life is too short to bother with negative people, everything is better with Champagne, and Han Solo shot first. When not writing, Ava is thinking about writing. Or wine. And she’s always thinking about bacon.